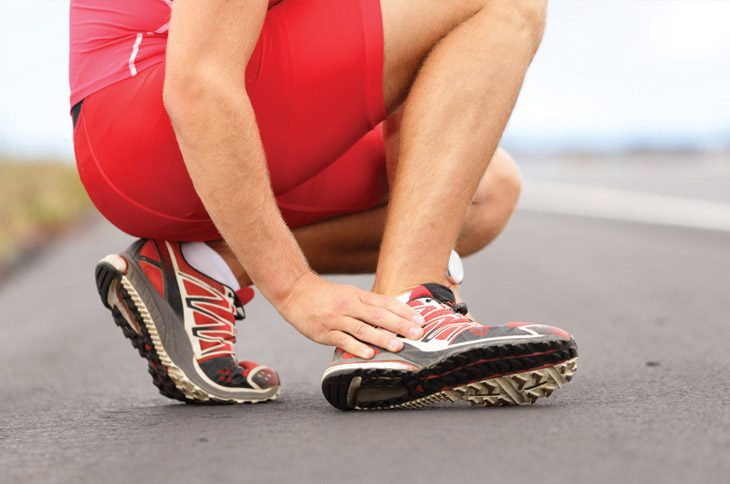 Do you know the top-five foot and ankle injuries in athletes? If you’re a trainer, an athlete or the parent of an athlete, these are the five “bad boys” to know. They can take you out, but it doesn’t have to be forever. The trick is to get the right treatment on time. (Emphasis on time.)

“If you wait too long to seek treatment, certain injuries become much harder to treat,” says Dr. Murken, a board certified orthopedic surgeon at Panorama Orthopedics & Spine Center. “In some cases, such as an Achilles tendon tear, it might not be repairable at all if you don’t get treatment on time.” (More on that later.)

In practice for more than a decade, Dr. Murken has seen some athletes wait six months to a year to finally get help. He cautions that playing this kind of waiting game can threaten the athlete’s entire career; although he understands why.

“A lot of people are scared to see us when they hear the word ‘surgeon,’” Dr. Murken says. “They think they don’t need surgery so they wait until the injury gets worse. Or they avoid us altogether. A lot of people don’t realize that surgeons treat many orthopedic injuries non-surgically and we are often the ones who help athletes prevent surgery.”

If you suspect you have any of the following top-five foot or ankle injuries, don’t hesitate to call an orthopedic surgeon – even if you suspect your injury doesn’t need surgery.

Low Sprains are the least serious of the two and are categorized by three levels: mild, medium and severe. With mild sprains, the ankle may feel tender, swollen or stiff, while severe sprains make it difficult to walk. Often seen in volleyball players, basketball players and soccer players, low sprains are what most people commonly think of as a classic step and roll sprain (the bottom of the foot faces inward and rolls onto the outside). Sprains can be diagnosed with a physical exam, although X-rays may be needed to rule out a fracture. Low sprains are often treated non-operatively with anti-inflammatories, elevation, taping, ice and bracing. If the sprain is severe, it may be treated with a boot cast and physical therapy. In the case of a mild to medium sprain, the athlete can expect to return to sports within a few weeks to a month. Severe sprains may require four to six weeks.

High Ankle Sprains are less common than low ankle sprains and are the more serious of the two. Patients with high ankle sprains often experience pain just above the ankle. They also feel severe pain when walking, with relief upon rest. Significant black and blue may also appear in the heels. Often seen in sports with a cutting action, such as rugby, football and lacrosse, the majority of high sprains occur when the athlete rotates the knee and upper leg internally or externally in relation to the foot on the ground. As a result the ligament that hold the tibia (shin bone) and fibula (outside leg bone) together tears. In effect, the rotation peels these two bones apart. High ankle sprains are treated differently depending on the grade of the injury. They range from grade one to three, with three being the most severe. High sprains can be diagnosed with an examination and/or with an MRI. Treatment includes ice, anti-inflammatories, rest, and either a lace-up ankle boot or a boot cast, which may be worn while sleeping. It may take eight to 10 weeks to return to sports.

Achilles Tendonitis often presents itself as pain behind the ankle joint, swelling and difficulty walking. Tendonitis can be diagnosed with a physical exam and treated with anti-inflammatories, ice, a boot and physical therapy. The athlete can expect to return to sports in six to eight weeks.

Achilles Rupture occurs when the Achilles tendon snaps. Athletes often report hearing a loud pop with the sensation of being kicked or hit. An Achilles rupture results in severe pain that makes it immediately impossible to walk. A rupture can be diagnosed with the Thompson Test, a physical exam that involves squeezing the calf muscle. In a normal patient the Achilles tendon will pull the foot downward when the calf is squeezed. But if the Achilles is torn, the foot will not move. This is a definitive test. Surgical repair is the preferred treatment because a non-surgical approach takes longer to heal and the Achilles is more likely to rupture again. A surgical repair involves reattaching the patient’s tendon back together. However, if the patient waits too long for surgery, a cadaver tendon may be required, which has a significantly greater failure rate compared to using the patient’s own tendon. It takes six months to a year to return to sports.

5. Sesamoid Injuries of the foot occur in the sesamoid bones located under the ball of the big toe. Unlike most bones, the small sesamoid bones are not connected to other bones but are embedded within tendons and muscles. Symptoms of a sesamoid injury include pain in the ball of the foot with possible pain when bending the big toe. Swelling and bruising may or may not be present. Sesamoid injuries are often seen in endurance runners, volleyball players, soccer players and basketball players. They can be diagnosed with an MRI and treated with a walker, boot cast and rest. In severe cases, surgical intervention may be required to remove bone fragments. Athletes can expect to return to sports in six to eight weeks, depending on the severity of the injury. Sesamoid injuries are sometimes referred to as a “nuisance injury” because athletes often return to their feet too soon to allow for complete healing.

Dr. Murken sees a wide spectrum of athletes from ages six to eighty. An orthopedic surgeon’s training is among the most extensive of all medical specialties. With ten years of medical training, including a foot-and-ankle fellowship, Dr. Murken is knowledgeable about the biomechanics of the entire body. That’s a big deal because it’s not just about an isolated foot or an ankle, as any serious athlete can tell you. It’s about all of the pieces and parts working together seamlessly in peak condition.